The Mundie Putter Golf League is a competitive amateur  league that has run continuously in Winnipeg since 1957.  The League consists of an ‘A’ Division and a ‘B’ Division.

The competition is played using the four ball format at match play.  Each team is represented by 8 players, and matches are played on Mondays.  Upon conclusion of the regular schedule, playoffs are held to determine a champion.

At the present time the League consists of 16 teams, 15 teams each representing a Winnipeg golf club and a team that consists of elite Junior players.  The 15 Clubs currently in the League are:

The 2015 League Championship was won by Breezy Bend.

Over the 59 year history of the League the competition has been dominated by Elmhurst with 23 wins, followed by Breezy Bend and Niakwa with 9, St. Charles with 5, Southwood and Pine Ridge with 4, the MGA Juniors with 3, and St,Boniface and Rossmere with 1 win each.

What are single length clubs?

As the name implies, single length clubs are a set of golf clubs where all the irons (but not the hybrids and woods) are the same length.

I first started dabbling with the notion of a set of irons that were all the same length long before the Internet was prominent.  Back then (late 70’s early 80’s) there were very few, if any, good sources of information on the topic so basically I reverted to the tried and true method called experimentation.

What caused me to start down that road was a realization that I think all golfers come to at some point in time, that being: there are one or two irons in the set that you hit much better than the other irons in the set.

For most golfers, that one favorite club that feels better and results in better shots is the 7 or 8 iron and in some cases the 6 iron.  I’ve heard many golfers say, “if I could just hit the rest of my clubs like I hit my  seven iron, I’d be a pretty good player”.

Back then I did not understand much about swing planes, and had only a rudimentary understanding of the prevailing principles of golf club construction.

To address this issue I decided I needed to get some instructional material about how major manufacturers assembled golf clubs and the principles they employed so I purchased some books on golf club assembly.  Before I knew it, I was  assembling golf clubs at first for my own use and soon thereafter for friends and fellow golfers.

Traditional golf club assembly principles dictate that clubs are progressively longer through the set.  Wedges start around 35 to 35.5 inches in length and then each club is built 1/2 inch longer so by the time you get to a 3 iron it is around  39 inches long.

To accommodate these changes in club length the lie angles change starting around 64 degrees for wedges and progressing to  59 degrees for a 3 iron.  The head weights also change starting around 300 grams for a sand wedge and arriving by increments at 230 grams for a 3 iron.  In theory the difference in head weight and shaft length from a wedge to a 3 iron should result in a set of clubs that all ‘feel’ the same.  The shafts are ‘tipped’, which means shaft material is removed from the lower end of the shaft to make them progressively stiffer as the heads get heavier.

In 1986 the Tommy Armour Golf Company produced a set of clubs called EQL (equal length).  These clubs featured a head very similar to the Armour 845’s which were popular at the time.  The difference was all the heads weighed around 260 grams and all the irons were the  length of a 6 iron.  Because the idea of single length irons was considered too radical a departure from the norm, Armour was not able to get any prominent professionals to play or endorse the clubs.  As a result the idea was scrapped and production was halted.

The EQL irons were inspired in large part by Moe Norman’s swing.  Norman, who used a single plane swing, choked down on most of his irons to the point where he was in reality hitting what amounted to single length irons.

I have a set of EQL’s and they are pictured below. 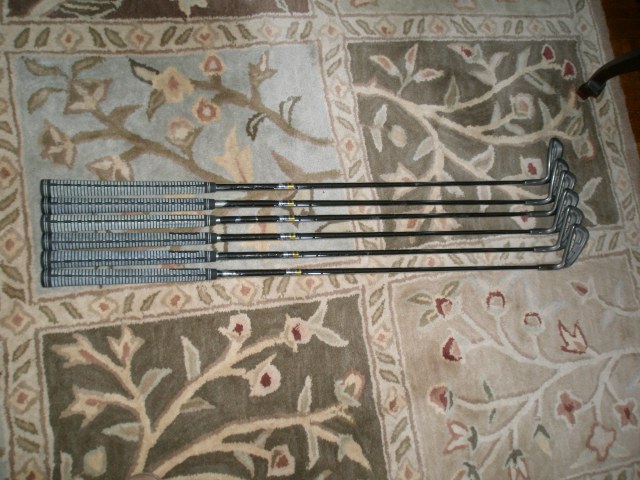 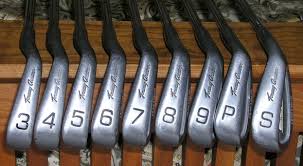 Although I have played these clubs with some success I was never a fan of the  offset Armour 845 heads.

I have settled on Pinhawk heads.  They are available from flop wedge through 4 iron (with an optional 4 hybrid) with a lie angle of 62.5 degrees and a head wight of 272 grams throughout the set.  The head I have selected is pictured below.

I will keep you posted.

When someone asks you about your game the answer you give may well depend on who is asking, why the are asking and when they are asking.

Many golfers have a tendency to either exaggerate of downplay their abilities depending on the circumstance.

On the first tee trying to negotiate strokes, golfers tend to downplay their abilities. If asked  at a social function how far you hit your driver and you realize it is highly unlikely that you will ever have to back up your statement you may say ‘oh, around 260- 280’.  The thing is you may have once hit a drive 280, with a 30 mile an hour favoring wind on a dry course with fairways like a parking lot but is that anywhere close to your average.

According to Trackman, at sea level, with no wind and under PGA Tour conditions using a Tour quality ball you need a swing speed of around 105 MPH to hit the ball in the 260-280 Range.  And that presumes you are hitting on the center of the club face with the optimum launch angel and spin rate.

The chart below provides and indication as to what to expect in terms of distance based on club-head speed. 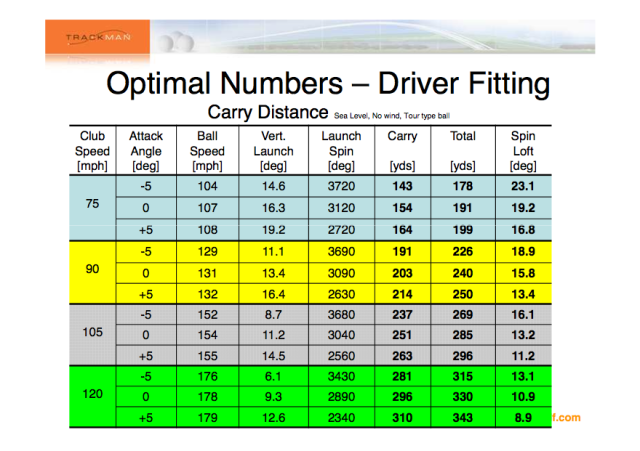